A five day long 13th Islamic Orientation Program for Mudasrisat ul Quran (Dawah workers) organized by Dawah Center for Women (DCW) of Dawah Academy of International Islamic University Islamabad (IIUI) concluded here at the female campus of the university. The program was attended by as many as 35 women teachers hailing from different cities of the country.

Vice President female campus Dr. Samina Mlik as a chief guest addressed the ceremony. She said Women can play a pivotal role to eradicate the prevailing unrest in the society. She said women have been given special attributes for dealing with challenges. She said that women are the ones that build society in the role of mother.

Dr. Faryal Ambreen Incharge DCW presented a detailed report on the occasion in which she apprised of the topics of the lectures and activities held. She informed that the participants were provided accommodation facilities as well. The participants were trained on the topics such as peaceful coexistence, interfaith harmony.

Dr. Ayaz Afsar,Vice President Academics also spoke on the occasion, he hailed the Dawah Academy staying that DCW has been a source of consistent hard work to bring its meaningful and positive impact on the society. He said that such programs must be held in continuity and hoped that the participants would spread the word and they wil be a source of disseminating the Islam’s message of peace. 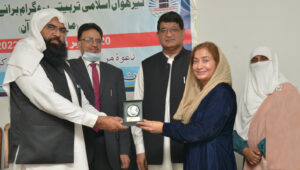 Dr. Qari Zia ur Rehman, represented the DG Dawah Dr. Muhammad Ilyas who also presented the crest to the Vice President female campus.  He appreciated the efforts of DCW saying that Dawah Academy is a prominent hub of preaching the message of Islam.

Dr. Zia ul Haq, DG Islamic Research Institute also spoke on the occasion and highlighted the prevailing problems in the society, Dr. Zia also shared the role of Islamic Research Institute regarding the national narrative “Paigham e Pakistan”. Dr. Zia said that Dawah Academy is providing valuable services to the society according to the teachings of Islam, He also told about the Paigham-e-Pakistan Centre for Peace, Reconciliation and Reconstruction Studies to the participants. In the end course participants were awarded course completion certificates.