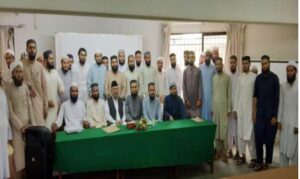 Dr. Syed Aziz ur Rehman, in-charge Regional Dawah Center, speaking to the participants of the course discussed topics such as the Art of Dawah its ethics  and methodologies.  In his detailed discussion the topic s of Dawah included principles of da’wah, the basic levels of da’wah, attributes of da’wah, conditions of da’wah, etiquette of da’wah, stages of da’wah, da’wah and organization, da’wah and limitations and legal aspects of da’wah. The course was attended by 80 participants, including students and faculty of Madaris and universities, as well as teachers of the school.