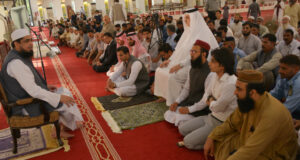 It was attended by the Saudi Ambassador to the Islamic Republic of Pakistan, Nawaf bin Said Al-Malki, high ups and employees of the Islamabad Capital Territory (ICT) administration, leadership of International Islamic University (IIUI), faculty, employees and students as well as residents of twin cities and renowned personalities from all walks of life.

On this occasion, Prof. Dr. Muhammad Ilyas, Director General, Dawah Academy, IIUI prayed for the departed souls of the Pakistan Army Officers and Soldiers. He also prayed for the peace and stability of the country and unity of the Muslim Ummah.